A New Paradigm of Inspiration is Born Climbing Killington Mountain

An unlikely story of inspiration, perseverance, and misplaced judgment – 13 miles deep into one of the hardest Spartan Races in the Country.

This was the size of my world on 9/14 (Photo Credit: KillingtonBlog.com) 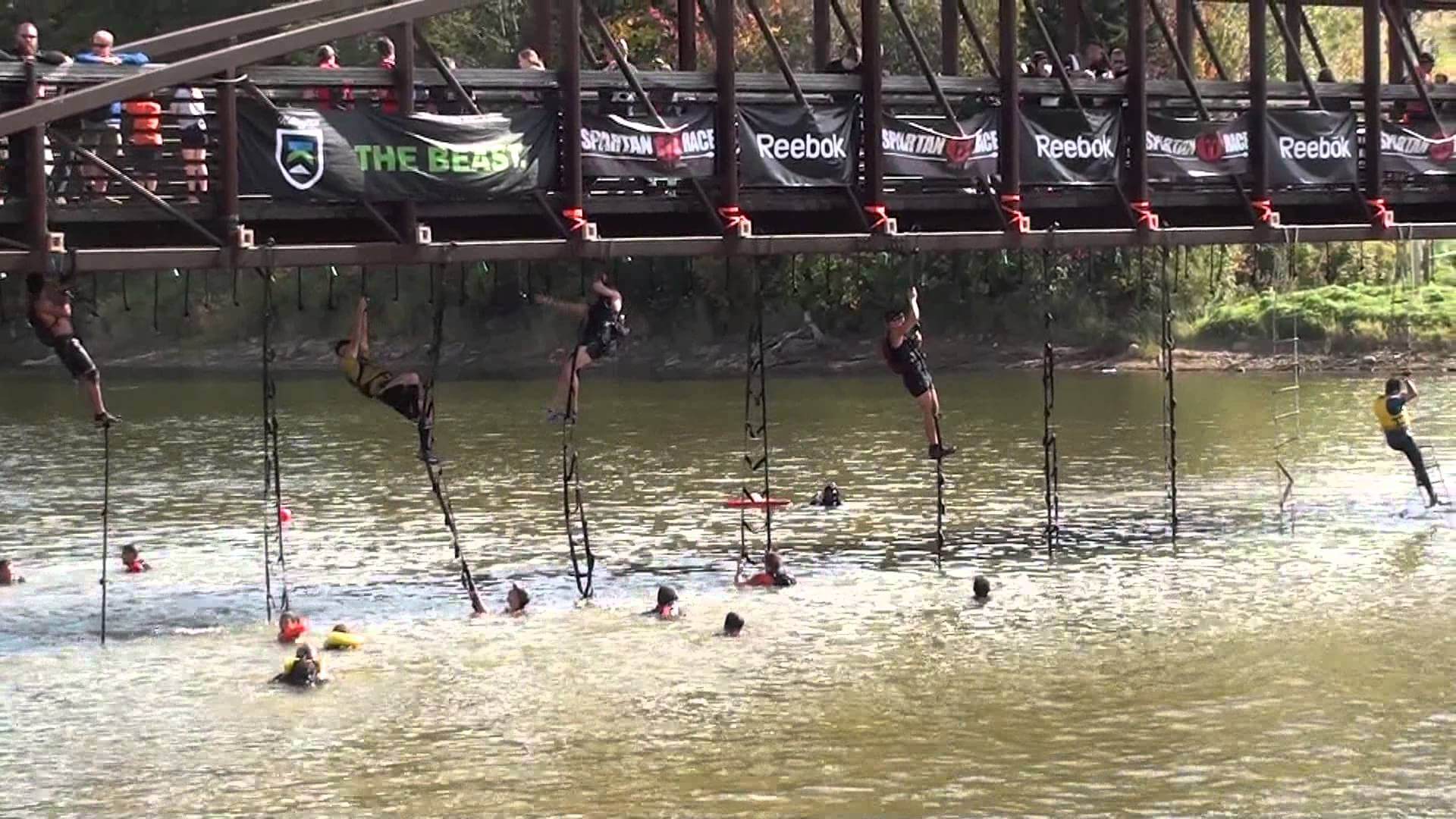 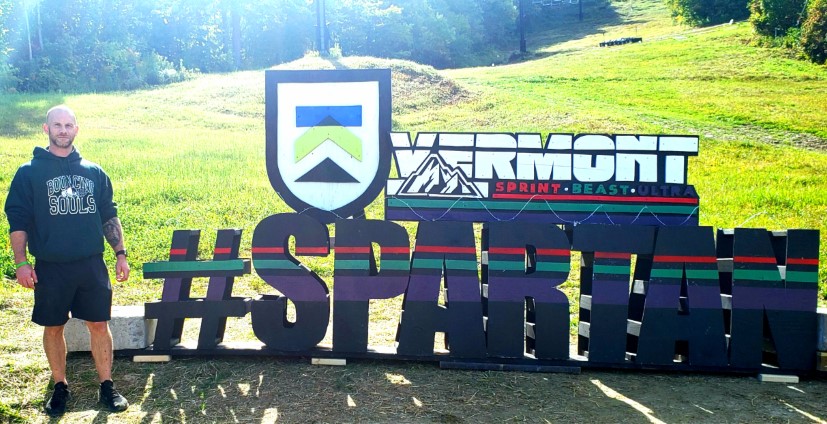 At some point, each one of us will find ourselves struggling to move forward, but unwilling to succumb to the challenge at hand. Counting every step, perhaps in blocks of five or ten – but careful to account for each one by deliberately affirming each in their own special place of the moment.

I was lucky enough to find myself doing exactly that -forcibly counting each step in blocks of ten – about 13 miles deep into the grueling 30-mile 2019 Spartan Killington Ultra.

Regarded as one of the most challenging OCR’s in the country – the 2019 Killington Ultra was soon to be the stage of an incredible revelation. It was here that I learned the arbitrage of inspiration. I learned that if I were to prove myself a worthy role-model to others, then I, myself, must seek inspiration from those of whom I wish to inspire.

Trust me when I tell you – a lot of things go through your head when your hiking up the northern slope of Killington Mountain. Everything hurts, nothing is easy, and only a very few things offer any sort of mental refuge.

I remember the climb; I remember it well. I recall the distinct smell of the brisk air when my body heat washed over my filthy shirt and past my face. I remember the sudden squalls and sullen protests provoked from the swinging chairlift, above. 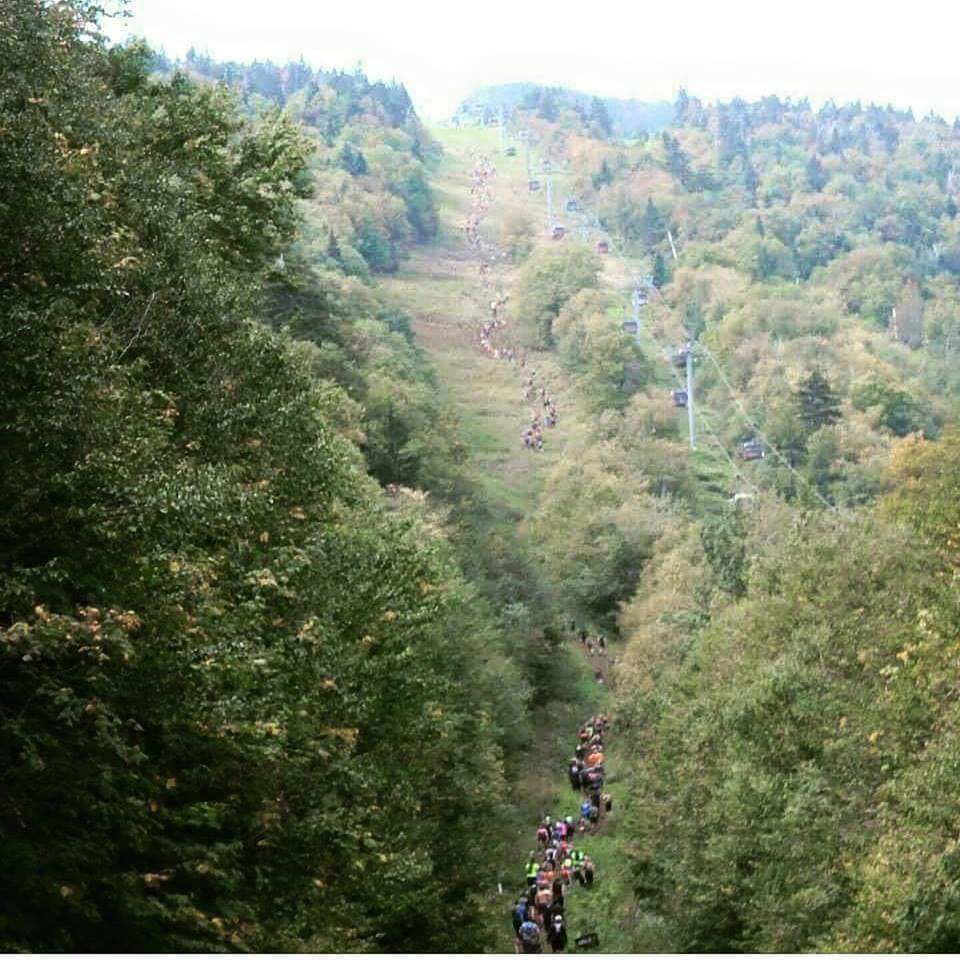 Hanging from my shoulders was my soaking wet rucksack. In it – about 20# of soaking wet gear, a Snickers Bar, and some pickle juice. It was cold, it was wet, it was a windy 44°.

Each advancing step was dependent solely on whatever traction my cleats could marshal from the slick ground, underfoot. I was making progress mere inches at a time, though sometimes I ended up putting my foot right back down in the same spot that I picked it up from.

As tiring as this climb was, I’m managing to hold my own among the other 100 or so Spartans in my midst. Some of us were faring better than the others though it’s clear that each one of us was in a similar headspace. It was quickly becoming a challenge just picking my foot up high enough to justify the effort. The aggressive (but deliberate) pace I set at the start of the race was beginning to wane.

In wrestling they say:

My guess is I was about three breaths deep into the 3rd period, my fatigue belied my athleticism.

I transcended counting steps and started rummaging around inside of my head, scrambling for something – anything – to distract me from the outside world. The prospect of going another 17 miles was beginning to lose its shine, and I remember thinking – right now, I’d let a rabid squirrel chew my foot off if I could just sit in a hot bath.

That was enough for me to pause and quietly chuckle to myself.

Mile 13 – The Ascension to Hell

Abruptly, I heard a sliding foot from behind me, it startled me back into my reality. The distinct sound of hardened cleats frantically scraping for traction on hard rock and loose gravel suddenly captured my attention.

I quickly dismissed it, thinking this was another frantic voice from inside of my head.

I quickly glanced down, peeking past my hip. I caught a glimpse of the figure behind me. Right on my heels was an abundantly out of shape, 35ish-year-old craft beer aficionado. Presumably wearing the same t-shirt he wears when he goes swimming.

Grunting in protest, I hoisted my tired body up to the next foothold as my foot dug in to the earth. I lifted my other foot and swindled yet another foot or so from the steep trail. I stepped again, then again…

From that point forward, an immediate and sudden echo paired my every step. As my foot abandoned each foothold, a foot from behind me would immediately claim and conquer that very same spot. It was in this fashion that we ascended – one deliberate step after another. The rocky soil crunching under each marching step.

Where the hell was this guy nine miles ago?
I was moving through the obstacles pretty fast; how could he have paced me through all that?
There’s no way he kept up with me on the rope climb… is there?

It didn’t take long for me to realize that this guy was moving in lockstep with me, literally walking in my footsteps… but for how long? Did he just catch up or has he been there the whole time? 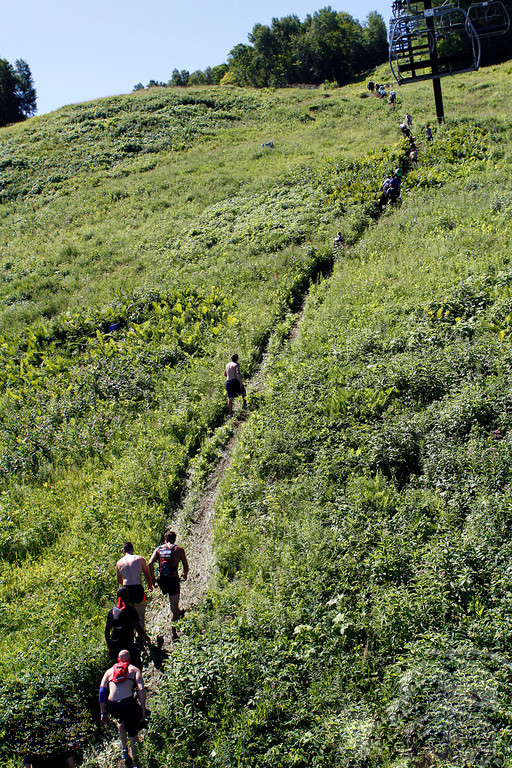 I’m no career Spartan athlete but I can hold my own for an amateur. This particular race was a 50k obstacle course on the very same mountain where the Spartan Races were born in 2010. I’ve already completed at least a dozen OCR’s in the last three years, so I figured I’d ice the cake in conquering this one.

Seven hours ago when I started this race I was in the best shape of my life. I had to be, the Killington Ultra is no joke.

So, unless you’ve trained for 13+ hours of pain and exhaustion then you’re not going to make it very far. Running a hard 50 miles plus climbing 1000 flights on the stairmill became the staple in my weekly training routine. Seven hours ago was simply the best physical version of me that I could have offered you. And frankly, I didn’t train like I should have to prepare for this thing. In spite of all that, this guy was right here… out of place among the other athletes on this slope. 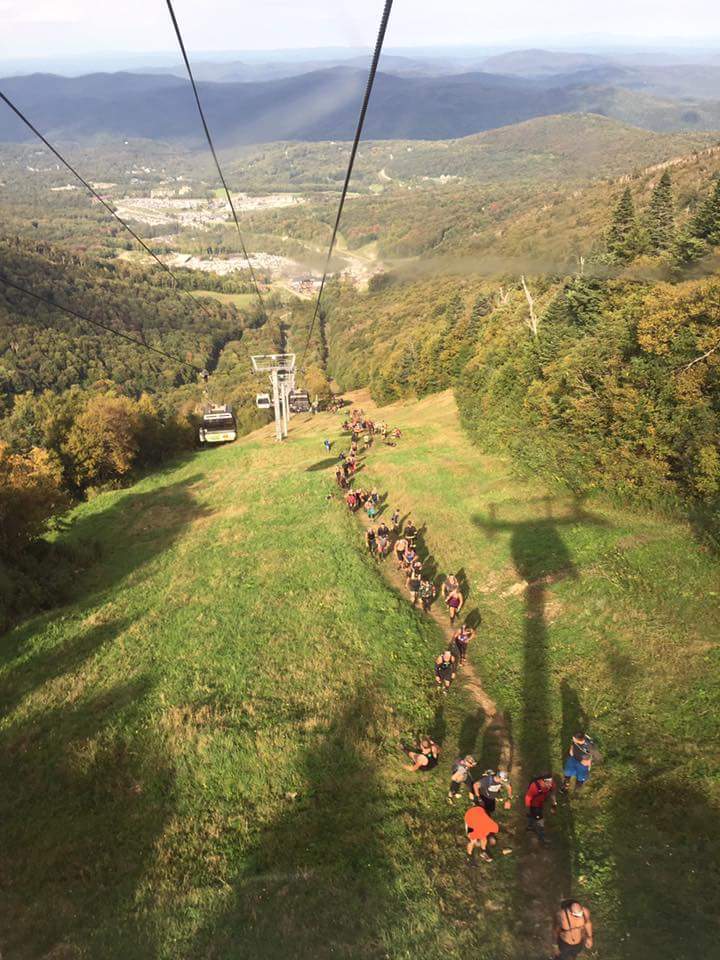 With everything I put into training for this thing there was no way he could keep up. Was there?

Then it dawned on me – This guy’s workouts didn’t earn him that piece of dirt, it was a mind-over-matter moment for him. He’s there by will, alone. His feet have only done his heart’s bidding, this guy was in the 3rd period since 6am when the race began.

Training didn’t get him there, believing got him there.

It wasn’t long before I stopped thinking about my knees hurting, or counting my steps. My focus was on getting to the top of that mountain – with this guy. He was counting on me to help him prove that he had what it took to be here. There was no way that I could let him down, he and I both needed me to get to the top of this mountain.

In turn, he showed me how deep I could dig, and what my body was capable of when my brain turned off and let my heart take the wheel. Little did he know that just a few minutes ago, I couldn’t have moved another inch up that mountain had he not prodded me to wake up. He was my inspiration. He lifted me up that mountain. I knew that if he could keep moving, then I could keep moving.

In that moment, he and I unrelented. We were unstoppable. Locked in accord, in a momentous feedback-loop. Time seemed to contract so much that what must have been an hour felt like it passed in just a single moment. 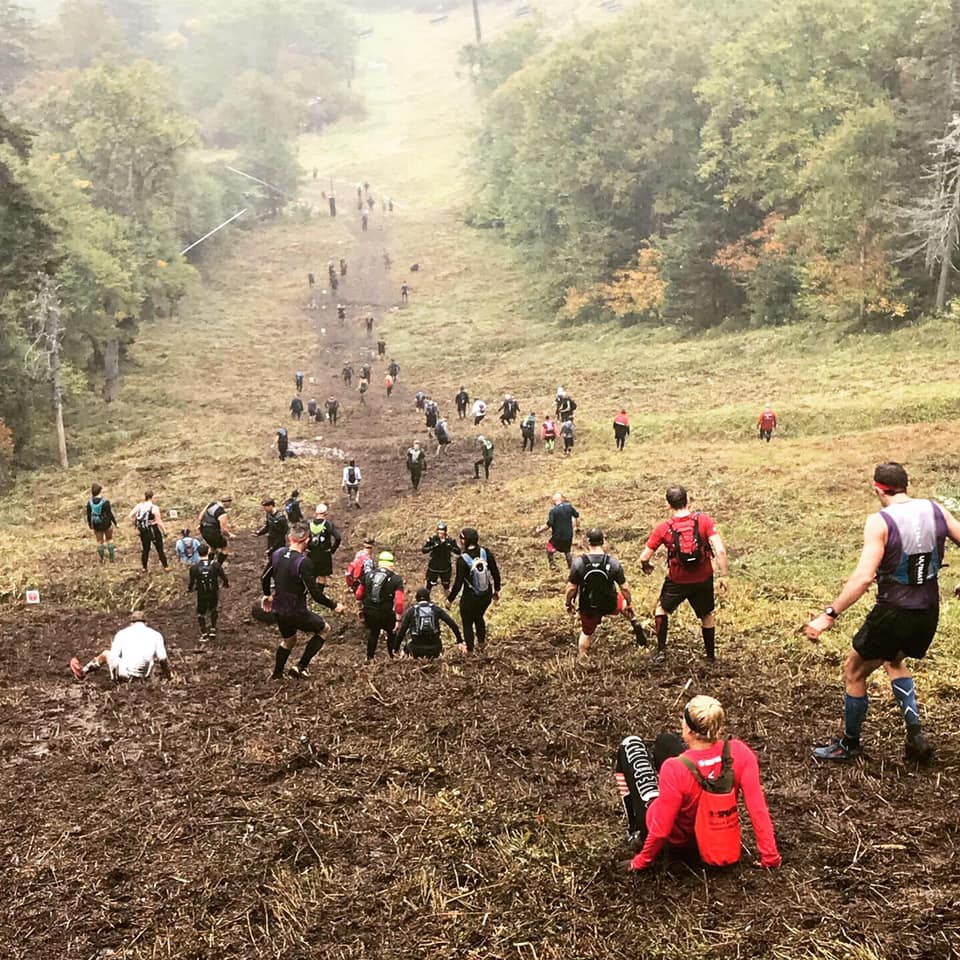 Going down a slope at Killington. Many of the downhills were worse than most of the uphill climbs. (Image Credit: Spartan Race – 2018 Race Images)

We stepped upon the summit, exactly a single step apart. I looked up from my final step, the wind suddenly gusted. The frozen rain stung as it pelted the backs of my hands, and my face. I filled my lungs with the cold mountain air, reached out my hand, and without saying a word we shook with a slap-pop-snap. Refueled, refreshed, and reignited, I dug in. I turned and sprinted toward the next obstacle, never looking back. 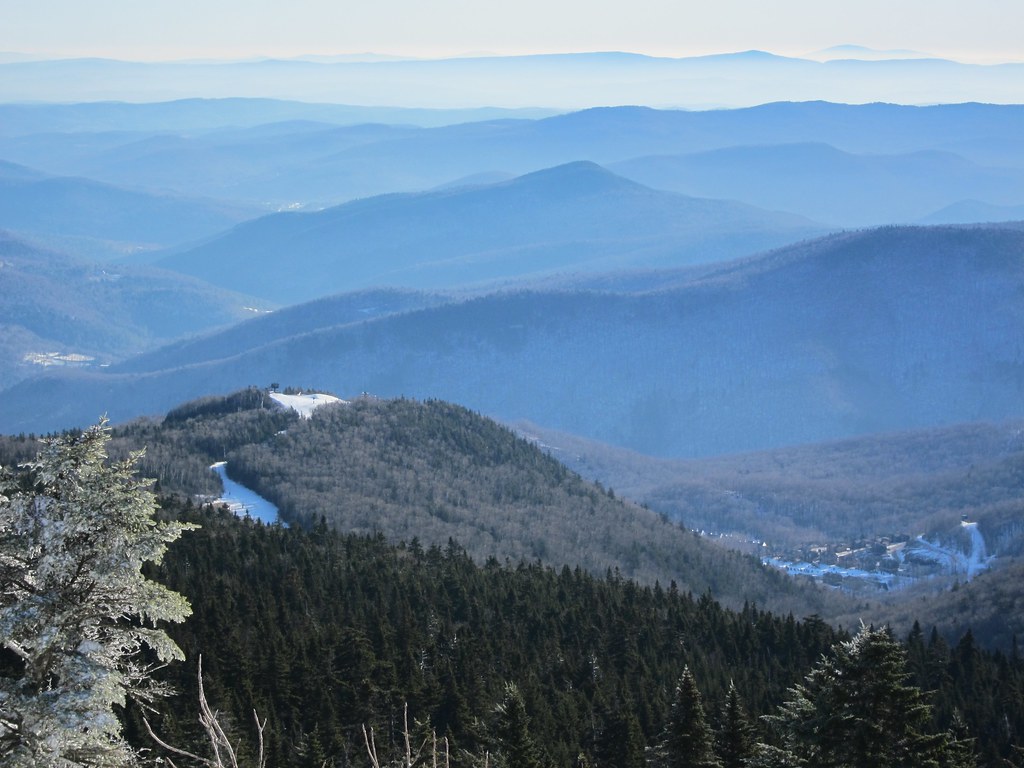 That day, It turns out that I discovered a new paradigm. I watched as my example manifested into something magical for an anonymous someone, and their example manifests in me. More importantly, I realized the extent of my responsibilities as an incidental inspiration.

Because this guy was right behind me. Watching. Counting on me to exemplify human potential, just as I counted on him to do the same for me.

He’s walking in my footsteps, moving in lockstep with me up my next mountain – welcome company in any ascension.

Now my reason for greatness, and forever an inspiration.

See you at the top.

Thank you for reading. 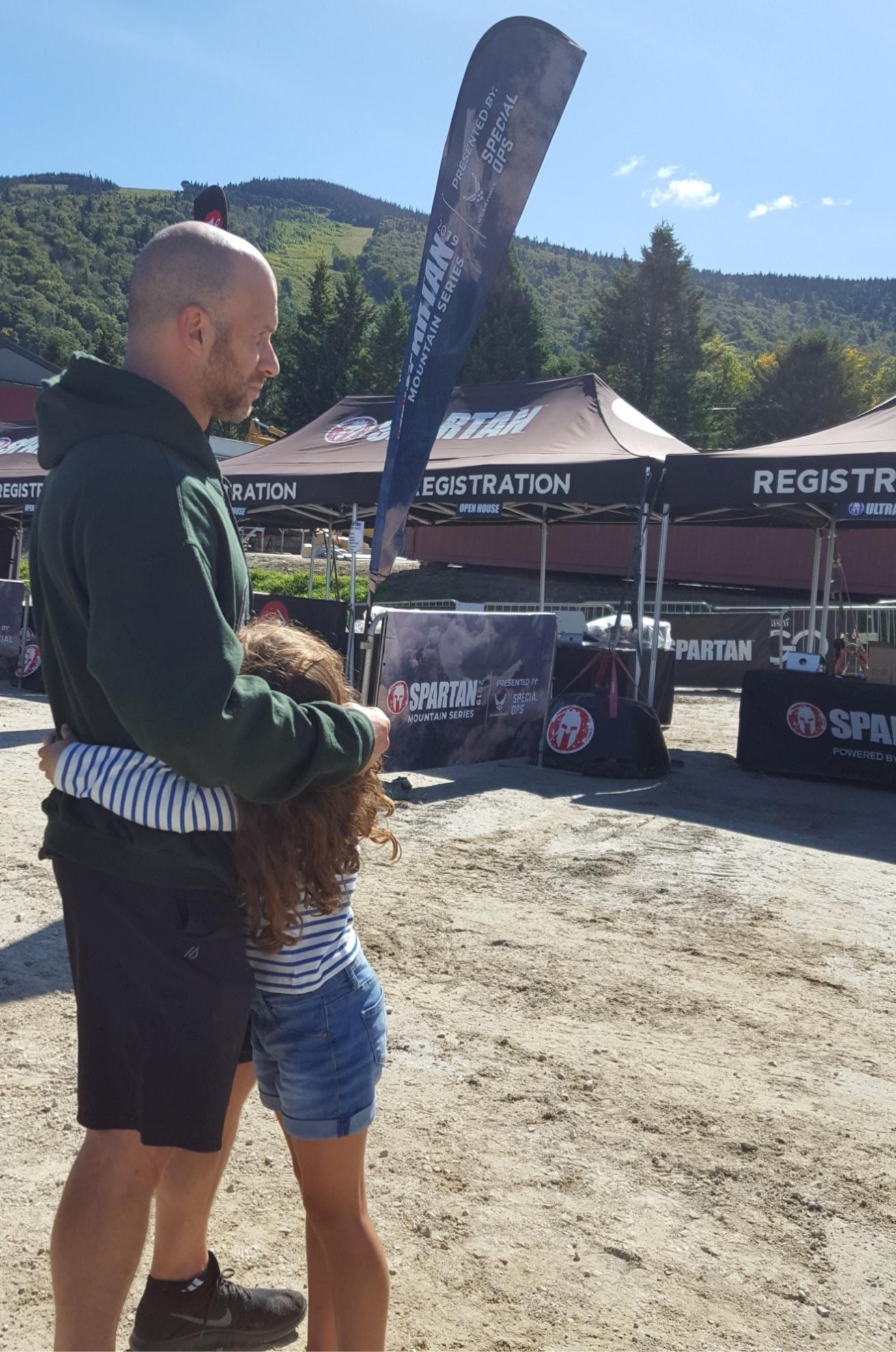 Me and my #1 at the registration tents the day before the race. She’s hugging me, wishing me luck and telling me “Be safe, Daddy”. (Photo Credit: My Wife)